Around a month ago, I received an email from BECTU, offering members a First Aid on Location course, which had been subsidised by Creative Skillset.

Being a film maker and having a particular interest in working in hazardous environments, there was no way I was letting an incredible opportunity like this pass me by 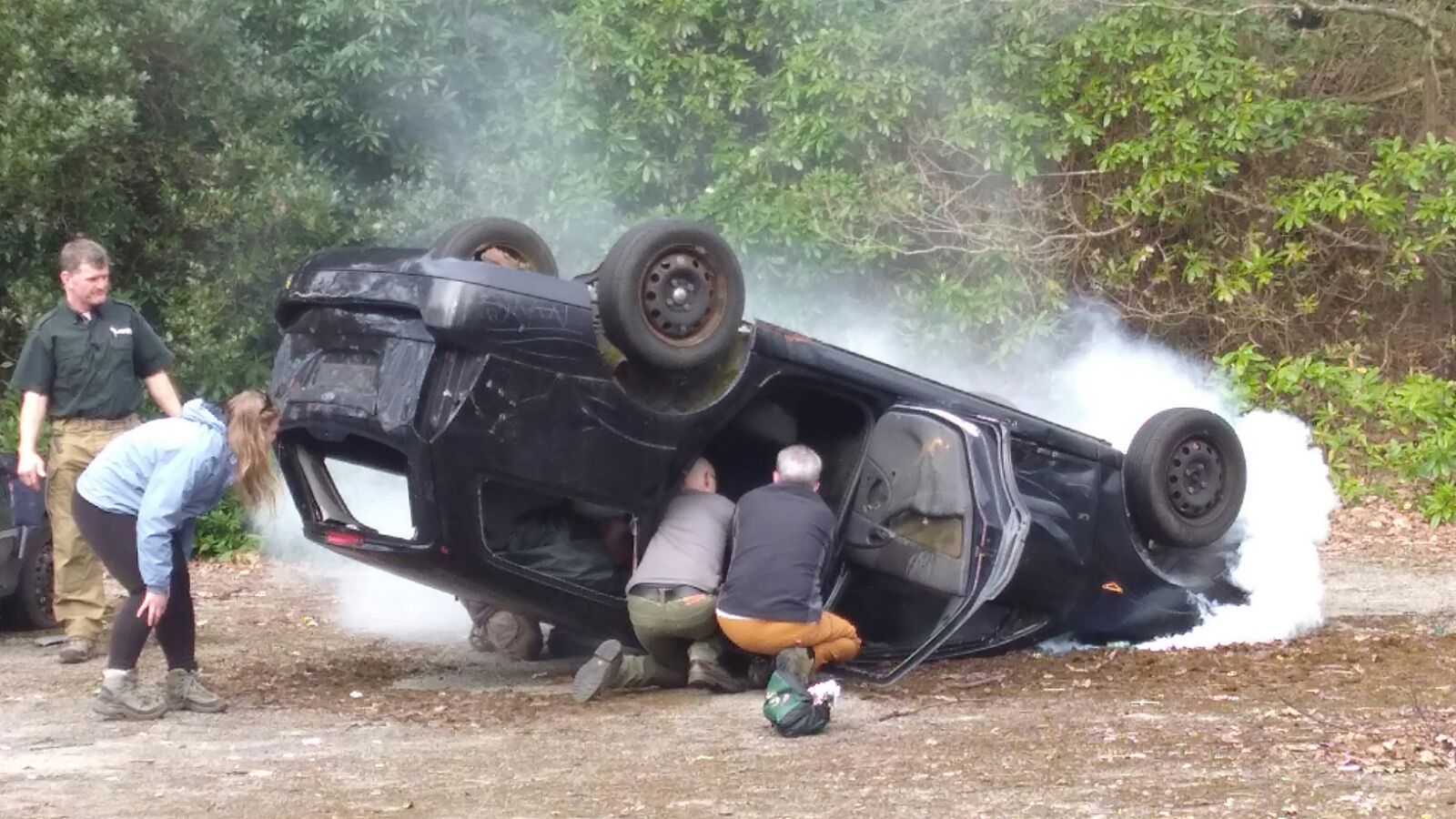 The course took place in the house and gardens of the beautiful East Hampstead Park and fortunately for us, we had decent weather.

There were 12 people on the course, all working in the film industry and all with a variety of skills and talents. The training was run by Lazarus training whose belief and focus was that we should ‘train for real’, meaning that training must reflect the reality of what people may actually face and the resources they may have access to.

The first day consisted of getting to know the basics, such as pressure points, and learning about the items in our first aid kit & how to use them. I was most fascinated by the Tourniquet - which became a vital tool in many of the scenarios we faced.

For the first situation we faced, Leroy played the role of the unlucky casualty. He played his part so realistically, that I felt quite weak at the knees. I was completely engaged throughout. The session ended when we were able to help in saving Leroy’s life after he ‘accidently’ stabbed himself in the leg with a knife.

On the second day, (even better than the first), we had to deal with six scenarios, some in groups of two and some in larger groups. We faced everything from campfire explosions to Leroy falling out of a tree and Paul (another trainer) shooting himself in the leg. One of the most fascinating parts of the day was learning how to make a stretcher out of coats, emergency splints and what to do if someone falls unconscious.

The final day was even more absorbing and we were faced with travel health, unconscious casualties in complete darkness, hypothermia, spotting the signs of heat exhaustion before it becomes Heat Stroke and rescuing casualties from car accidents.

My fellow course members were all fascinating people in their own right, with such a diverse range of talents and film skills. Working with them made the course even more enjoyable and I very much hope that I get to work with all of them sometime again in the future.

At the beginning of the course, I was enthusiastic, but slightly apprehensive; by the end I was confident, a little less scared of blood and completely exhausted.

I must give a massive thank you to BECTU and Creative Skillset; without them, I wouldn’t have been able to have taken the course and to Lazarus for their training, endless skills and knowledge. I never knew that First Aid training could be so rewarding and enjoyable.

To find out more about Charlotte’s company go to www.cacreativemedia.org

Charlotte Austwick is a filmmaker, actress, writer, performer and BECTU member. She has recently established her own production company CA Creative Media, which is a non-profit organisation that uses film and photography to challenge prejudices and stereotypes in the 21st century.

Following an email from BECTU Charlotte signed up for a course “First Aid in Remote Locations”, and this is her account of the experience.

END_OF_DOCUMENT_TOKEN_TO_BE_REPLACED

Why we must have a…
Tim Page talks about this year's Climate and Employment Proof…
END_OF_DOCUMENT_TOKEN_TO_BE_REPLACED
Unionlearn Annual Report 2020
Over the past year union learning has continued to open up…
The union learning Climbing Frame celebrates 10 years
The union learning Climbing Frame is a free website for ULRs and…
PCS run Bright Sky training to tackle rise in abuse
Bright Sky is a free to download mobile app providing support…
Bectu run bite sized training sessions online
As part of the union’s response to COVID 19 lockdown, the Bectu …
POA Learning hold Festival of Wellbeing
The festival will see a number of online webinars, run by three…
Northern TUC host wellness webinar for older and retired workers
The webinar will take place from 12.30 to 1.30pm on Thursday 2 …
Catch up with unionlearn’s Lockdown webinar series
Hundreds have people have been tuning into the weekly webinars…
Copyright © 2020 Unionlearn. All rights reserved.
Copyright © 2020 Corporate+. All rights reserved.