Chris Gurdev worked within branch management of Yorkshire Building Society but a conversation with Learn with Aegis resulted in him taking on a new role as a Union Learning Rep – and he’s not looked back since. 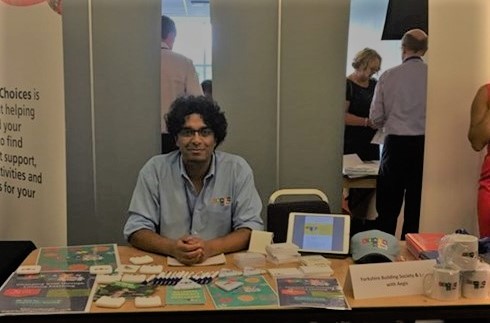 Learn with Aegis approached Chris because of his enthusiasm for learning and passion for developing others. He completed his Stage 1 training in early 2017 and from then on, there has been no stopping him.

The role inspired Chris to source courses to develop and upskill himself, achieving qualifications, giving him added confidence and abilities and this has opened a door to a whole new career path.

Chris explained why he became a ULR:

I believe that the greatest asset to any organisation is people in its organisation.  I had the opportunity to support people in the organisation to help them achieve things they may have thought out of reach or never knew they could do.”

My rep role involved finding the right courses for people and discovering how they best learn.”

Following a suggestion from Learn with Aegis Chris trained to become a Dementia Champion, which has resulted in him presenting sessions on living with dementia to professional groups and the general public.

This gave Chris a real boost in confidence and he managed to overcome nerves to present a dementia friends session to a room of over 70+ people.

Chris said: “The thought of presenting to a large group was daunting, I have my former manager to thank for that as well, Michele Harris.  She was there at the front being a friendly face.”

One of Chris’s proudest moments was working with Learn with Aegis Project Worker Julie Thompson to create a platform to bring Learn to Aegis to the general public.

For two years me and Julie worked on a concept, which became a reality last year where we held a stall at a skills and careers fair.  We managed to really engage with jobseekers, schools, the local council and other businesses who we will look to start working with.  We have started something that Learn with Aegis will continue to build on.”

Together we worked on this and Julie doesn’t take enough credit for it.”

Chris has not only taken the opportunity to support learners at work but, being a firm believer in practicing what you preach,  he has also continued his own development. In 2017 Chris started a Diploma in Business Management and from here has continued his studies to push himself to get a chartered status. In 2019 he finally achieved the highest academically he can achieve as a chartered manager.

Chris has thoroughly enjoyed the role as a Union Learning Rep and said that his highlights have been:

Seeing learners achieve what they never thought they could and seeing them go from strength to strength. Working with Learn with Aegis, what an amazing team, they put their total faith in me. They were prepared to take a risk on me.  They believed in me.”

Chris is moving on thanks to the skills that the union helped him gain, he said:

I am now changing my career, I will take the experience and qualifications I have obtained, and I will be a development coach, teaching management NVQ’s to the next leaders. I will remind them that the best assets are their team.  You put your faith in your team, it will pay you dividends in the future, they are the innovation and the catalyst to any objectives you are trying to achieve.”

END_OF_DOCUMENT_TOKEN_TO_BE_REPLACED

Leading the way on LGBT+ apprenticeships
Research from Stonewall shows
END_OF_DOCUMENT_TOKEN_TO_BE_REPLACED
BFAWU show you are never too old to have a Quick Read
BFAWU North West Project Worker John Fox and BFAWU Union…
Unionlearn seminar demonstrates how trade unions build skills
The seminar, on March 25th, will launch a new Learning &…
Unite’s Tazim finds Quick Reads a great way to build English skills
Tazim Ladhu has been
Like father, like son - but who’s teaching whom?
In 2015 a young family moved to England from Sri Lanka, looking…
Trade union learning "reignited" my passion for learning says BFAWU’s Sarah Woolley
Sarah said that the she wasn’t very active as a member in the…
Nominate a Union Learning Rep for unionlearns 2020 awards
Unionlearn is asking unions to put forward ULRs who have made a…
Leading the way on LGBT+ apprenticeships
Research from Stonewall shows there is still a re
Copyright © 2018 Unionlearn. All rights reserved.
Copyright © 2018 Corporate+. All rights reserved.