The Bakers Food and Allied Workers’ Union (BFAWU) has been working with high street baker Greggs to train staff and raise environmental awareness. 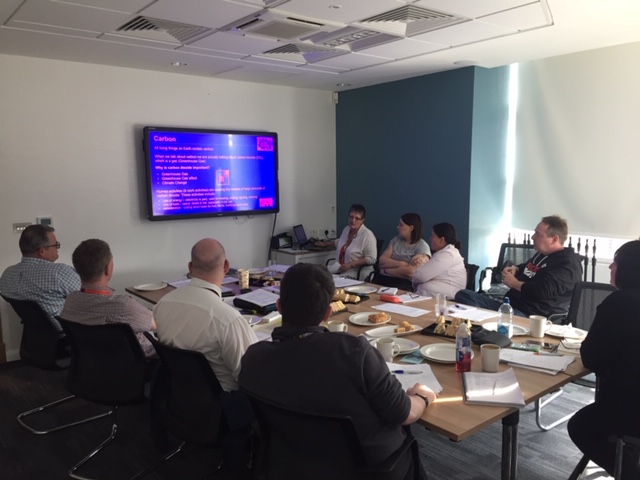 Sarah Woolley, the general secretary of the BFAWU, has been leading the unions work to green workplaces where they have members.

Sarah explained why the union is getting involved with the green skills agenda:

After moving the climate change motion at TUC Congress in 2017, we approached a number of employers about our plans to extend the health and safety reps role to incorporate an environmental aspect, with a view to work towards green reps in the future, when we had a training programme in place.”

Greggs bit our hands off. We explained that our health and safety reps would initially become SHE reps (safety, health and environment) and they jumped at the chance to work with us to make that happen.”

Greggs were very keen to work with the union on this agenda and offered to produce some training that was relevant to the company, as well as being acceptable to the union.

We really are pushing at an open door. Greggs have had a SHE department for years and were waiting for us to catch up – it’s usually the other way around. It’s refreshing to have an employer engage so much and it not be a fight!”

Sessions were trialled with reps before rolling out the training. The first training session looked at carbon footprints, with further sessions covering waste management and energy use.

Sarah feels this is just a start and said:

It would be fantastic if other employers would engage in this way. We now have a template of how the sessions can be run; they just need tweaking to make them relevant to specific employers.”

The format Greggs has used is great. They have included us in the discussions, and to a point the development, though they have taken the lead with that. They have made the sessions short, informative and engaging. There really is no reason why other employers can’t work with us to do the same – many are doing some great things around the environment!”

Beyond the work with Greggs, the BFAWU has been collating green surveys that were completed at their annual conference and various regional meetings. Sarah said this has shown there is an interest from reps and members for the union to develop a role for green reps.

In the meantime, the union is producing a quarterly Green Future newsletter which is full of best practice, ideas that can be done at home or at work, interesting articles and links to more information and online resources.

Back at Greggs, the reps who attended the sessions have given very positive feedback, mainly about being more aware of their own behaviour and how they can make a difference in their shops or at home.

END_OF_DOCUMENT_TOKEN_TO_BE_REPLACED

New demands on digital skills
The Lloyds Bank consumer digital index 2020 was released on the…
END_OF_DOCUMENT_TOKEN_TO_BE_REPLACED
Tolpuddle Martyrs’ Festival reduces its carbon footprint
When it comes to meeting the challenge of the climate emergency…
Birkbeck offers a fantastic climate for learning
Hundreds of trade union members have taken advantage of this…
Building a sustainable future with the Green Skills Partnership
Badged as Think Global Act Local, the scheme has been developed…
Why we must have a workplace conversation around climate change
Tim Page talks about this year's Climate and Employment Proof…
UNISON Carbon Literacy training in Stockport
Over the past year, environmental officer Mary Clarke,…
Gardening success at HMP Hatfield
The POA Learning Centre in Doncaster is based alongside HMP…
Catch up with unionlearn’s Lockdown webinar series
Hundreds have people have been tuning into the weekly webinars…
Copyright © 2020 Unionlearn. All rights reserved.
Copyright © 2020 Corporate+. All rights reserved.