Former Union Learning Rep Chris Gurdev has had quite some learning journey. After eight years of study Chris, with the support of Learn with Aegis, has achieved his learning goal and been invited to become a Chartered Fellow in Management. 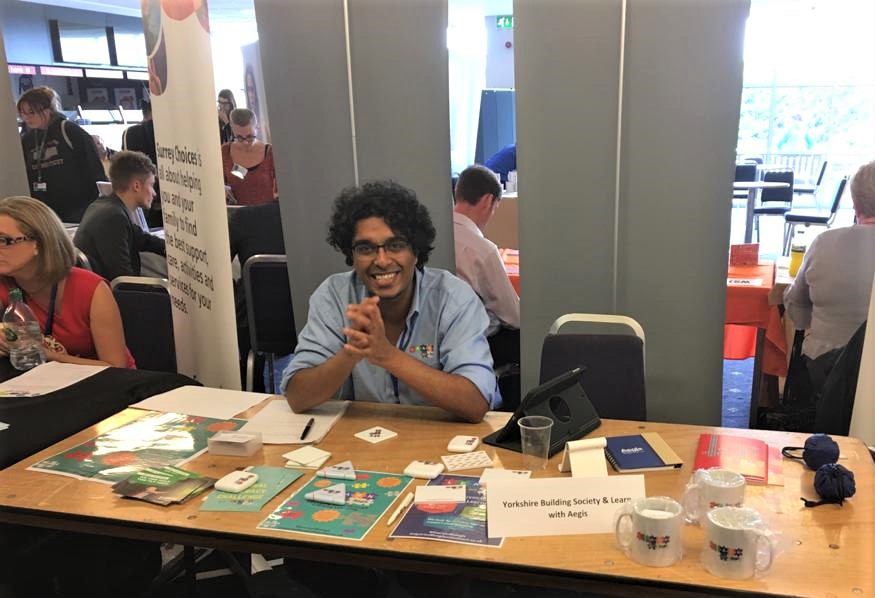 Chris started his learning journey back in 2012 whilst working at Yorkshire Building Society Sunbury branch, within branch management.  One day an email landed in his inbox offering opportunities for funded learning – from this email an incredible learning journey started.

For Chris this felt like an ideal opportunity to gain some qualifications, upskill and rehome his talents as a leader.  He then undertook and completed an NVQ Level 3 in Leadership and Management, alongside completing his functional skills level 2’s, in Maths, English and ICT.

Chris wasn’t going to just sit on his laurels after achieving his level 3 NVQ. In 2016 with the support of Learn with Aegis, Chris joined the project as a ULR and then moved onto starting a BTEC Level 4 in Leadership and Management.

Chris explained why he wanted to move up to the level 4. Chris commented:

I was able to build on my skills and refine them to a much higher level.  At the time my manager Michele Harris was very supportive in me doing this.  I was then able to really prove my strategic mettle by collaborating with Julie (Project Worker for Learn with Aegis) where we focused on a brand-new project linking with the wider community.”

Together we started bringing Julie’s aptitude to risk and data analysis to shape a picture, which Learn with Aegis continue to use to this day.”

Chris went on to say:

After this collaboration, upon reflection I knew I was ready to aim for Chartered Status with CMI. They, alongside Learn with Aegis, were very supportive and in February 2019 I achieved Chartered Status.”

At this point in his learning journey, whilst being supported by Learn with Aegis and using his own ULR experience as evidence to support, Chris became a Chartered Manager. In 2019, following a restructure within the business he was in, Chris moved on to work as an NVQ Skills Coach/Assessor for a learning provider to businesses.

Chris was always passionate about training, supporting people and continuous learning.  His experience within management, his own learning journey and experience as a ULR, made him a perfect fit for this type of role.  In Spring 2020 Chris was invited to become a Chartered Fellow in Management, the highest level he could achieve in his area of knowledge.

As a project we are so proud of Chris and all his achievements and obtaining his fellowship is just the icing on the cake.  As a ULR Chris was all about supporting people, not just learners within the business he worked in, but also in his community too.”

One example of this being when he gave Dementia Champion talks to over 100 people.  He always used to pitch to the project what he described as “a small idea”, but there was no such thing as a small idea with Chris and it always turned into something very special.  So, knowing Chris and how he operated, we were never in any doubt that he would progress and achieve this level of academic success”.

Though Chris has reached the highest level he can currently achieve, none of his former colleagues at Learn with Aegis feel this is the end of his journey and will be keeping in touch to find out what next.

END_OF_DOCUMENT_TOKEN_TO_BE_REPLACED

Engage: taking control of your career
Lucy Thompson tells us about Enginuity's Engage learning…
END_OF_DOCUMENT_TOKEN_TO_BE_REPLACED
Unionlearn prepares for Autumn Festival of Learning
The Festival will feature high profile events such as the…
Stephen gets creative following PCS online training
PCS member Stephen Levy recently took part in one of the s
Unionlearn publish 2020 annual report
The report, entitled “Making Skills and Learning Work”, comes at…
GMB help Fode continue learning through the lockdown
Fode was born in Guinea Bissau on the West coast of Africa, and…
Unionlearn Annual Report 2020
Over the past year union learning has continued to open up…
Unionlearn Value My Skills in now available in 10 languages
The Value My Skills online tool was developed as part of
Birkbeck holds Career Bootcamp to develop employability skills
Unionlearn partner Birkbeck is running the Bootcamp from 28th –…
Copyright © 2020 Unionlearn. All rights reserved.
Copyright © 2020 Corporate+. All rights reserved.