The GMB’s ReachOut project lives up to its name by supporting learners in workplaces and local communities across the north-west. 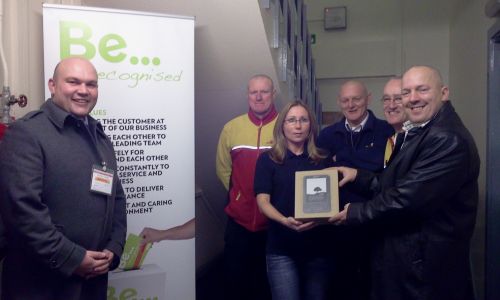 The GMB’s ReachOut project, which supports learners across the union’s North West and Irish region, has expanded significantly since Senior Project Worker Dave Flanagan joined the team 11 years ago.

Initially focussed on delivering English, maths and IT courses to workplace learners, these days ReachOut has significantly expanded its offer by creating a network of seven Adult Community Training (ACT) centres in the region, as well as working closely with employers and providers to develop quality apprenticeships and support young people on traineeships.

Over the years, we have widened the scope of the delivery to include employers, community groups, faith groups and charities that work within the communities where we have GMB membership and wherever we identify a need the Union Learning Fund (ULF) can assist us with.”

The expansion into community settings began with the first ACT centre in Accrington in 2009, a partnership with Eaves Brook housing association, which provided the original high street premises, from where ReachOut could engage local residents.

Initially offering English, maths and IT courses, the Accrington centre later secured funding to provide pathways into employment programmes and also worked with Eaves Brook to help its residents develop their own budgeting skills and improve their financial planning.

Five years after it opened, demand for learning at the centre had so far outstripped supply that it moved into its current premises in a former primary school in the town, which incorporate two larger dedicated learning suites.

Now in its ninth year, the project continues to thrive, supporting both GMB members and local people, many of them on benefits and/or long-term unemployed.

The most recent ACT centre is based In Blackpool, where ReachOut has teamed up with local homeless charity His Provision, which offers cooked meals on a regular basis to those who are economically inactive or experiencing poverty, and partners with Blackpool Centre for the Unemployed to offer welfare rights advice and help in accessing online services like Universal Credit.

ReachOut has also teamed up with provider TDB Training and St Antony’s Centre to offer traineeships to young people not in education, employment or training (NEET).

Some youngsters were not being granted the opportunity to get onto apprenticeships because they didn’t have the necessary qualifications, they didn’t succeed or they weren’t selected to attend.”

As well as boosting their functional skills, the trainees can learn the basics of warehousing, distribution and other business functions in the live working environment of the Manchester warehouse that services the local food bank network.

ReachOut continues to serve the union membership through learning agreements, strong partnerships with providers, open access to training centres, development of the ULR network and liaison with employers to advise and guide on training and skills for the benefit of members and workers.

The project regularly attends regional and national conferences within the union to promote the value of lifelong learning and link up with campaigns and initiatives to raise awareness and better educate members in relevant areas.

Dave himself has led by personal example. He explained:

Over the years, I’ve built up my own portfolio of skills and accreditation where I’ve missed out previously, so I’ve done my maths, English and IT up to Level 3, completed an apprenticeship in management and am now studying towards a law degree.”

This is all about gaining the knowledge and skills to promote opportunities available through ReachOut, he says. “All activity is geared to supporting those we set out to serve, to try and improve the life chances of our members, community learners, the long-term unemployed and those on benefits.”

They wholeheartedly support not only the direct work with GMB members, branches and officers but also the engagement of new members in the communities where we operate.”

As the scope of the project has expanded, so has the team. Dave explained

Originally we had a very small project team who covered all activities across the region but now we have specialisms within the team in the key areas of work required by the ULF and the priorities set by the Department for Education (DfE).”

This means we now have experts in specific areas, such as Michelle Graham developing support programmes for apprentices, Joanne Phillips developing community engagement opportunities, Bipin Mistry on workforce and CPD development, Bev Taylor on functional skills and Margaret Seger on ICT development – all effectively supported by an experienced, enthusiastic and dedicated administration team in Lisa, Bernadette and Harpreet.”

Being able to maintain an established team is a key ingredient in ReachOut’s continuing success, Dave says, thanks to its access to funding streams that complement ULF activity.

Whether ReachOut is working with young unemployed people, workplace learners or community learners, the aim is the same.

The core value of the project is all about giving people opportunity where it may have been missed before: in the case of adults, they may have had to leave school at 14 or 15 and never had chance to achieve qualifications.”

ReachOut has always been innovative and forward-thinking in responding to people’s ever-changing needs, evolving and adapting in times of uncertainty but with our sights very firmly set on supporting those in most need.”

This story first appeared in the unionlearn Winter 2018 Learning Rep.