Unions provide a wide range and diversity of learning in the workplaces they cover – as this snapshot from Tesco’s stores covered by Usdaw in the North West demonstrates. 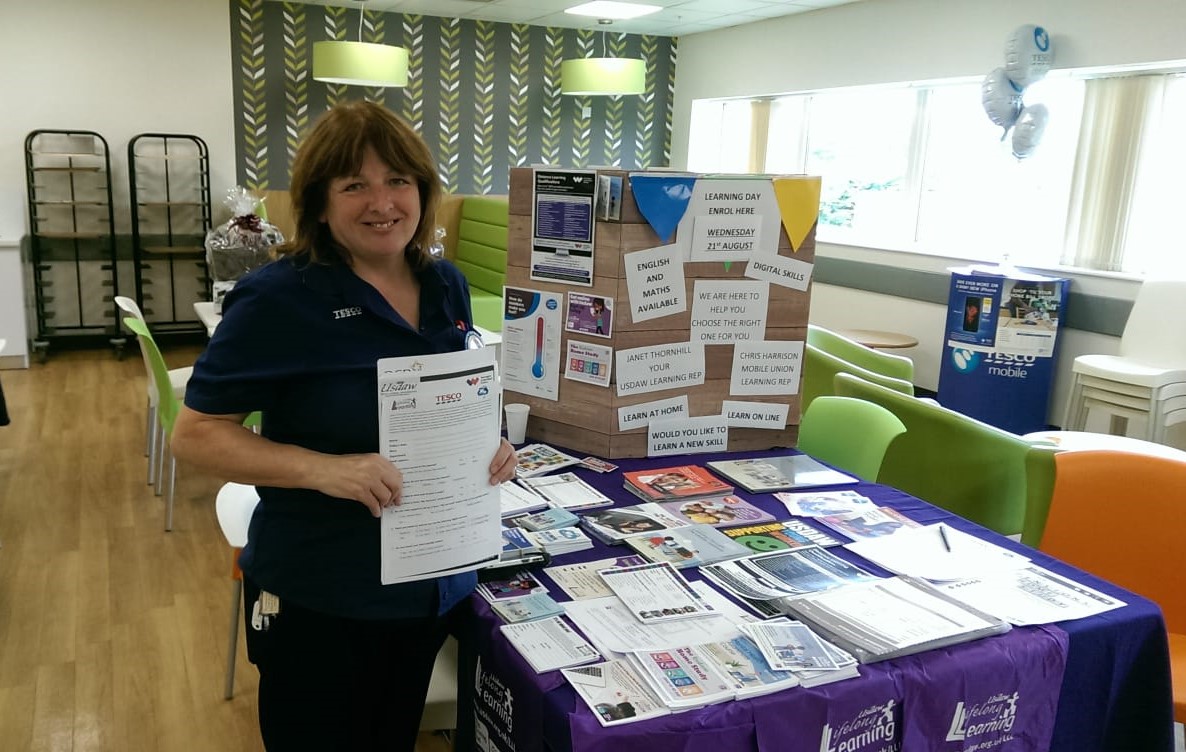 During the early months of 2019, and in just three stores, Usdaw Union learning Reps (ULR’s) and Mobile Union Learning Reps (MULR’s) planned, organised and delivered separate initiatives around Distance Learning, Apprenticeships and Understanding Payslips which led to over 60 people taking up some form of learning.

At Tesco Chester, a Checkout Learning Campaign promoting Distance Learning courses was delivered by the new ULR and supported by the Mobile ULR. The reps spoke to over 40 people about the courses that were available and nearly half of them completed a survey card, registering their interest in Mental Health, Team leading, Customer Services.  The most popular subject was Mental Health with 11 people interested and three each for the other courses.

When the reps followed up with a sign-up session a fortnight later, everyone registered for their course. And the reps followed up the success of the mental health course by arranging a one day briefing session on the subject which was attended by four reps, six managers and the store’s People Partner.

Over at the Tesco Meir store, ULR Janet Thornhill has been involved in Tesco’s Apprenticeship Scheme over the past 2 years.  In the first year, there were six people recruited to the programme, Retail Level 2.  All staff on the course completed on initial assessment in, English, Maths and IT.  Because Janet attended the induction on 24th April (2017), she could help to make sure that staff received the time off the job they were entitled to and also offer support with the job roles etc.

The importance of the ULR’s role in supporting apprentices was underlined when learners completed the course and were all successful in gaining their qualification as planned on 20th April 2018.

ULR Janet was active in the next promotion of the Apprenticeship programme in the staff canteen. Nine people registered their interest and 4 people went on to sign up for the course with the support and encouragement from the ULR, both at the open day and at induction.  All four people have now completed their initial assessments.

Finally, at the Tesco Widnes store the ULR delivered a Payslip workshop.  It was advertised just before Xmas through a promotion campaign in the staff canteen and 22 attended the sessions at the beginning of January.  Building on this success, the ULR then ran a drop- in day for members to sign up for a Learn my Way course.  This was also very successful and 16 people signed up for Learn my Way courses and 2 more signed up for an Excel course on Alison.com.

I am really proud of the work that our ULRs and MULRs are doing to support learning in the Division."

Their imagination and hard work makes sure that staff have opportunities to learn an incredible range of subjects to help them develop their skills, get qualifications or just have fun learning new things.”

END_OF_DOCUMENT_TOKEN_TO_BE_REPLACED

Supporting workers facing redundancy
Mary has recently been supporting members facing redundancy…
Promoting union learning - a handbook
A handbook for union learning reps (ULRs) and reps involved in…
Learning and Skills Policy Update - May 2020
This newsletter is intended to keep unions and other…
Join unionlearn focus groups to shape future training programme
Even before the current pandemic, significant numbers of jobs…
Caroline's learning journey inspired by Usdaw event
When Mobile ULR Sue Sowe
Supporting learners through lockdown and beyond
When Covid-19 forced a temporary hal
The Lockdown Learning Rep is now out
In this special Covid-19 edition of the Learning Rep e-magazine…
Learning Rep - Summer 2020 Edition
In this special Covid-19 edition of the Learning Rep e-magazine…
Copyright © 2020 Unionlearn. All rights reserved.
Copyright © 2020 Corporate+. All rights reserved.