When he started growing a few tomatoes for the mess in his fire station seven years ago, FBU learning rep Simon Jakeman had no idea he was sowing the seeds of a green revolution in London’s fire stations. 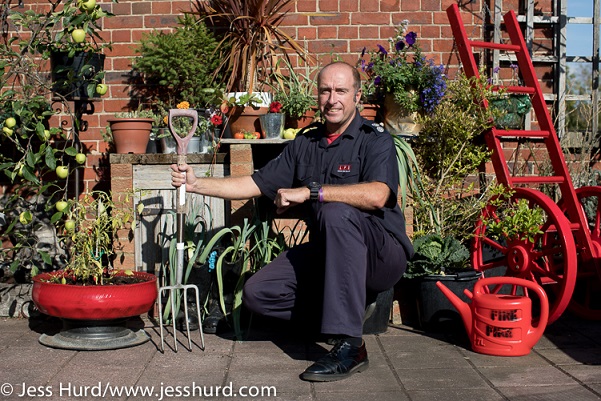 Like any good gardener, green-fingered union learning rep Simon Jakeman knows all about how mighty oaks grow from little acorns – although with him, it’s more a case of London Fire Brigade’s (LFB’s) green agenda springing up from the tomatoes he was growing in a fire bucket a few years ago.

I thought if we could start growing a bit of food for our mess (because we cook our own dinners at the stations) then it’s not coming from the other side of the world – and that was the start of it.”

This was back in 2011, when Simon had been working at Surbiton Fire Station for four years, after originally joining the service (and the Fire Brigades Union) in Surrey in 1995.

The tomatoes were just the beginning: soon Simon was growing a range of fruit and vegetables on a new rooftop garden at the station, which meant many of the ingredients in his co-workers’ meals were clocking up food metres rather than food miles – and thus avoiding the environmental impact of road or even air freight.

And thanks to its roof garden, improved recycling, energy-saving campaign and support for sustainable travel, Surbiton was named the capital’s greenest fire station in 2012.

It was around the same time that Simon took an environmental course at his local college sourced by the FBU, which also led him to train as a union learning rep.

But it was looking around possible secondary schools with his eldest son that prompted him to significantly step up his learning.

Seeing all that opportunity in front of those children, I thought, ‘I’ve got to get back into learning and studying’ and that re-lit my passion for learning.”

After completing an access module with The Open University, Simon took the plunge and enrolled on a degree in environmental studies, graduating six years later.

The knowledge and skills he gained on the course he put to use by both promoting learning opportunities and encouraging greater environmental awareness with his colleagues.

When I was at the fire station, I might have a bit of down time to do a bit of studying and firefighters would always look over your shoulder and ask, ‘What are you up to?’ and that’s how the conversations start, trying to inspire others to get involved

And it seemed to work: there are quite a few people at my old station now doing different courses.”

Three years ago, Simon was watering the fire-helmet hanging baskets in front of Surbiton station when a senior brigade officer appeared and struck up a conversation about the environmental work he’d heard Simon had been undertaking.

That encounter ultimately led to Simon being seconded to LFB headquarters to help spread the word about the impact of climate change and what firefighters could do about it.

I put a presentation together and went off to speak to every single watch in London: there’s 103 stations and 412 watches – and with some area talks and headquarters too, that made about 430 presentations in all.

It took roughly 18 months of two presentations a day to get round everyone.”

Simon’s presentation covered some of the key facts about climate change, what the brigade was doing on the environment and how people could get involved.

Unsurprisingly, the presentations sparked a lot of debate. After all, as Simon himself points out, firefighters are seeing the impact of climate change in their working lives.

The way I’ve always engaged with firefighters is that we’re the ones out there on the frontline of changing climate – when you see the floods, it’s firefighters wading down high streets in boats or we’re chasing wildfires – London’s had double the number this year, nearly 2,000 in all.”

But like anyone else, firefighters are not immune from feelings of powerlessness in the face of the global environmental challenge.

When I was at one of the fire stations, I was talking about recycling and a firefighter at the back of the room asked, ‘What’s the point of me recycling one glass jar. It’s like turning up to an earthquake with a dustpan and brush?’ But another firefighter on the same watch said, ‘If we all turned up with a dustpan and brush, think of the difference we could make’ – and I think that’s the way: these small actions do add up but we’ve all got to do our bit.”

After completing the presentations marathon, Simon was able to secure his current job in the headquarters sustainable development team, where he coordinates the work of green champions across the brigade and lends his expertise to the new generation of fire station roof gardens.

For example, when the four watches at Brixton decided to work with a number of community organisations to create a new mindfulness garden on the roof of their station earlier this year, Simon not only shared his skills with the project but also donated the award-winning garden he created for this year’s Hampton Court Flower Show.

What marks the Brixton garden as different is that it was designed as a space where firefighters can get some respite from the everyday pressures of their stressful jobs in the tranquillity of its surroundings.

Brixton green watch manager Mat Rosendale, who is part of the blue light champions initiative to promote awareness of mental health in the emergency services, was a key part of the Brixton design team.

Learning and gardening alike both require time, support and persistence but, as Simon knows, the end result of both can be life-changing.

Learning is a bit like gardening: once that seed is planted, you nurture it and then it just takes off: we’re always busy but you can always find time – and when you go for it, just see what happens.”

This story first appeared in the unionlearn Winter 2018 Learning Rep.

END_OF_DOCUMENT_TOKEN_TO_BE_REPLACED

New demands on digital skills
The Lloyds Bank consumer digital index 2020 was released on the…
END_OF_DOCUMENT_TOKEN_TO_BE_REPLACED
The union learning Climbing Frame celebrates 10 years
The union learning Climbing Frame is a free website for ULRs and…
PCS run Bright Sky training to tackle rise in abuse
Bright Sky is a free to download mobile app providing support…
Bectu run bite sized training sessions online
As part of the union’s response to COVID 19 lockdown, the Bectu …
POA Learning hold Festival of Wellbeing
The festival will see a number of online webinars, run by three…
Northern TUC host wellness webinar for older and retired workers
The webinar will take place from 12.30 to 1.30pm on Thursday 2 …
Catch up with unionlearn’s Lockdown webinar series
Hundreds have people have been tuning into the weekly webinars…
Keeping on an even keel in trying times
A couple of weeks after the start of
Copyright © 2020 Unionlearn. All rights reserved.
Copyright © 2020 Corporate+. All rights reserved.