Tony Dytiche is a bus driver and Trade Union Learning Rep with Unite the Union at First Bus Potteries at Hanley in Stoke on Trent. With Learning at Work Week happening in May Tony took the opportunity to promote workplace learning to colleagues at the public transport provider. 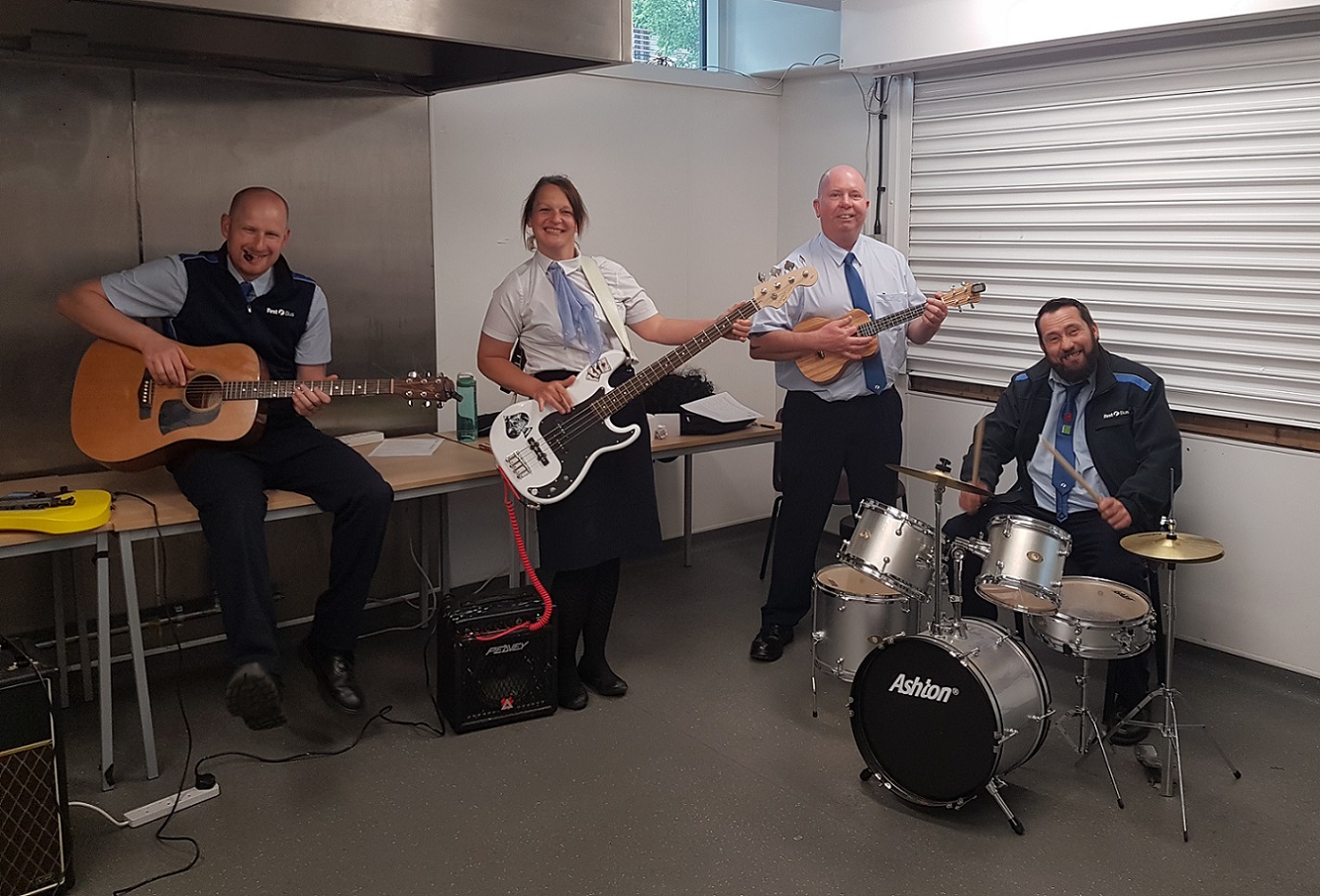 Tony organised a full week of activities ranging from priority areas such as Mental Health awareness and functional skills tasters to themed days to inspire workers to try something new including a music day, dog training and photography.

One learning day that proved very popular, and mixed having fun with learning skills that could be useful in the future, was Thursday’s Virtual Reality day of activities which also explored IT skills. This tied in with this years Learning at Work Week theme of Shaping the Future

On the VR day we had a driver Paul Mathews come in with his gaming computer, his headset and games. We had people taking off and landing on harrier jump jets, wing flying off mountains, sitting in the Space Station, playing ping pong, boxing, fighting against robots etc.”

Paul also explained the inner workings of computers and the basic terminology.

We have a smallish depot of around 300 people with some working at outstations and others either off sick or on annual leave but over 50 people actively took part using the VR with far more than that asking questions and generally showing a positive attitude.

A good result in my view.”

Tony did all the preparation work for his depot but said there was help from Unite along with colleagues who actively went out of their way in their own time to do these activities on the specific days.

First Bus were very supportive and gave Tony stand down time to carry out the weeks work and also morally in supporting him and the activities.

Zena Astley is Staff Manager at the site and said.

I felt that Tony was fully committed to this Learning at Work Week and gave this his full support and was both enthusiastic and encouraging with all staff.  He had a vast amount of literature to hand out to anyone and everyone.”

To promote the event Tony was busy putting up notices and talking to as many people as he could, though he felt he might produce “a newspaper type pamphlet" next year to highlight events. The events were open to all staff, both present and retired, and, as the Trade Union Learning Room is adjacent to the staff canteen, the activities were very visible and easy for staff to drop into.

The Learning at Work Week activities at First Bus were seen by Tony and the union as a way to inspire people into longer term learning, and this worked.

I had a chat with quite a few people regarding courses that we had to offer and we had three sign up during the week to Litmos and a few sign up for Transave also with the Union facilitating that for me – which I plan to follow up.”

I also had an Eastern European colleague ask me for a course on being British. This was something I couldn’t do, but what I did do was put together some great stuff off the internet on how to be British and the British culture which he said it was helpful.”

This isn’t the end, and with the help of fellow Unite ULR Neil Vernon Tony is setting up lots of functional skills courses. These have the added bonus of a free tablet upon completion, and Tony said:

In our Worcester depot we have had 37 people sign up and we have also had a lot of interest here in Stoke over the week but I am waiting to see how the Worcester TULR gets on first and then we will roll it out here in Stoke also.”

All in all a packed week for the First Bus workers in Stoke thanks to the hard work of Tony and the union – and he is already planning for next year.

END_OF_DOCUMENT_TOKEN_TO_BE_REPLACED

Engage: taking control of your career
Lucy Thompson tells us about Enginuity's Engage learning…
Working from home through lockdown
Like many people BFAWU Project Worker Kamran has been working at…
Stephen gets creative following PCS online training
PCS member Stephen Levy recently took part in one of the s
Unionlearn publish 2020 annual report
The report, entitled “Making Skills and Learning Work”, comes at…
Unionlearn Annual Report 2020
Over the past year union learning has continued to open up…
Birkbeck holds Career Bootcamp to develop employability skills
Unionlearn partner Birkbeck is running the Bootcamp from 28th –…
“Just ask!” Creative writing and working with authors
She had given freely of her time for us in the past by helping…
A decade of online support for ULRs
Before going online the Climbing Frame was available as an…
Copyright © 2020 Unionlearn. All rights reserved.
Copyright © 2020 Corporate+. All rights reserved.