An Usdaw monthly rep’s meeting at the Tesco Bury store resulted in the union deciding to get involved with an upcoming Mental Health Awareness campaign day at the store – and use their experience as union reps to help make it a success. 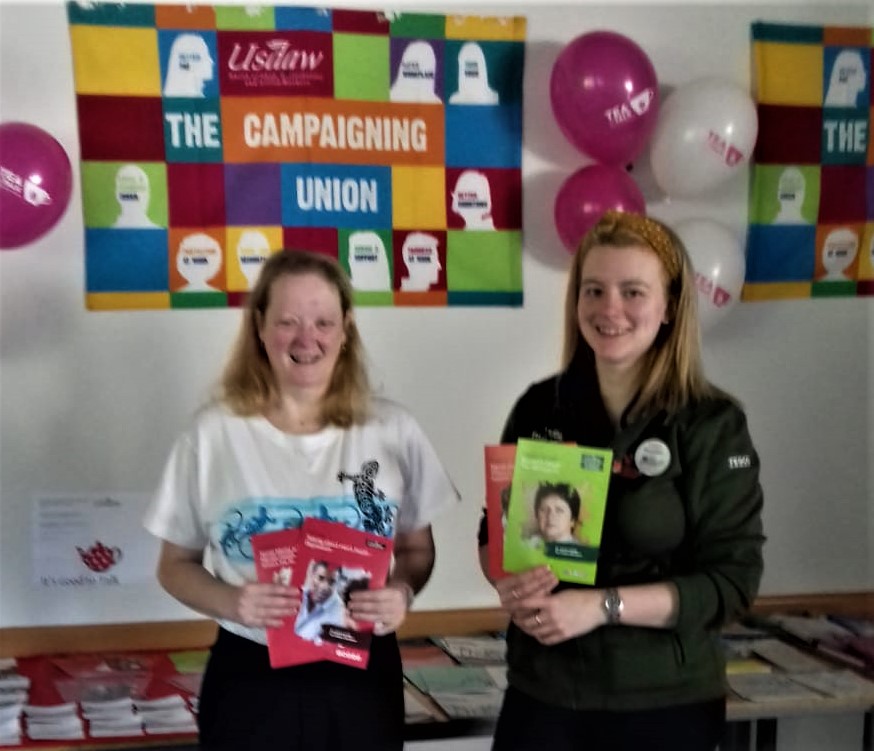 At the meeting reps gave ideas and suggestions, and agreed that they all wanted to have a role in the organising and supporting the campaign day. Usdaw Union Learning Rep (ULR) Janette Boote arranged for Mobile ULR Sue Sowe to tell the team more about the day and what it entailed.

After some discussion on RLF’s mandate, the reps invited them to attend. The rep team also invited Amanda Marshall the store’s People Partner and also Michelle Byrne the Usdaw Area Organiser, who both accepted.

On the day, shop stewards, Matt Fairlie and Heather Hampson had collected lots of leaflets and phone numbers for people to contact for help and advice. The team received promotional packs from Usdaw which included a survey ‘It’s Good to Talk’ and packs of tea, coffee, sugar, coasters and packs of post-it notes. A number of staff donated homemade cakes to the campaign.

Mary and Clare of the RLF interacted well with staff using lots of different types of quizzes, including poetry, quotes from famous people and a word wall which was to get everyone involved. Each staff member gave the word, and at the end of the campaign day, Mary would take it away and either write a poem or short story using every word from the wall. Area organiser Michelle and Amanda, the store people partner, came to visit, and both said it looked impressive and complimented everyone on all the work they had put into the day.

The day was a tremendous success, and Store manager Chris Stewart said:

I am proud of the team and what they have done.”

I was impressed in how the staff were all getting involved in supporting the event. I have never seen the staff canteen so full of energy and the buzz of the room was carrying onto the shop floor. We must carry it on and build on it.”

Mary and Clare from RLF were pleased to have taken part and felt the day had gone really well.

It was a really heart-warming event that brought out the best in everyone – lots of conversations, smiles, support and amazing homemade cakes” said Mary. “What a positive day!”

Its value is beyond measure. Every workplace should offer this level of interaction, support and care.”

Sue took the opportunity to follow up Chris’s pledge to carry it forwards and discuss the one-day Mental Health Awareness course with him. He had already had one course held in store.

Chris was enthusiastic and agreed to get it organised. The day also inspired a member of staff to be signed up as a ULR.

Usdaw rep Matt summed it up when he said

A day that really achieved its goal of getting working, talking and really feeling cared about. I could not be prouder of my role.”

END_OF_DOCUMENT_TOKEN_TO_BE_REPLACED

Leading the way on LGBT+ apprenticeships
Research from Stonewall shows
Quick Reads hold 2020 in launch event in Liverpool
The event is being held Liverpool Central Library between 18:00…
FBU and Essex CFRS use the Apprenticeship Levy to support Firefighters stay fire fit.
The scheme in question is an advanced (Level 3) Apprenticeshi
RMT Learning team promotes courses to London Underground workers
The event took place at the Transpor
Free lunchtime sessions make learning appetising in Bristol
Six months ago, Teresa Crichton, communications officer at Brist
Southampton UNISON gets crafty this Christmas
Liz explained that she ran two drop-in sessions, these were two…
BFAWU Learning Team train as Mental Health First Aiders
The team have been actively promoting and supporting learning…
Morrison’s and BFAWU work together in Wakefield
The range of courses helps the staff both in their personal and…
Copyright © 2018 Unionlearn. All rights reserved.
Copyright © 2018 Corporate+. All rights reserved.