In June apprentices at Toyota UKs Apprentice Development Centre (ADC) in Burnaston Hall just outside Derby gathered together for their annual presentation and awards ceremony – with Unite playing a vital role supporting the young people develop their careers. 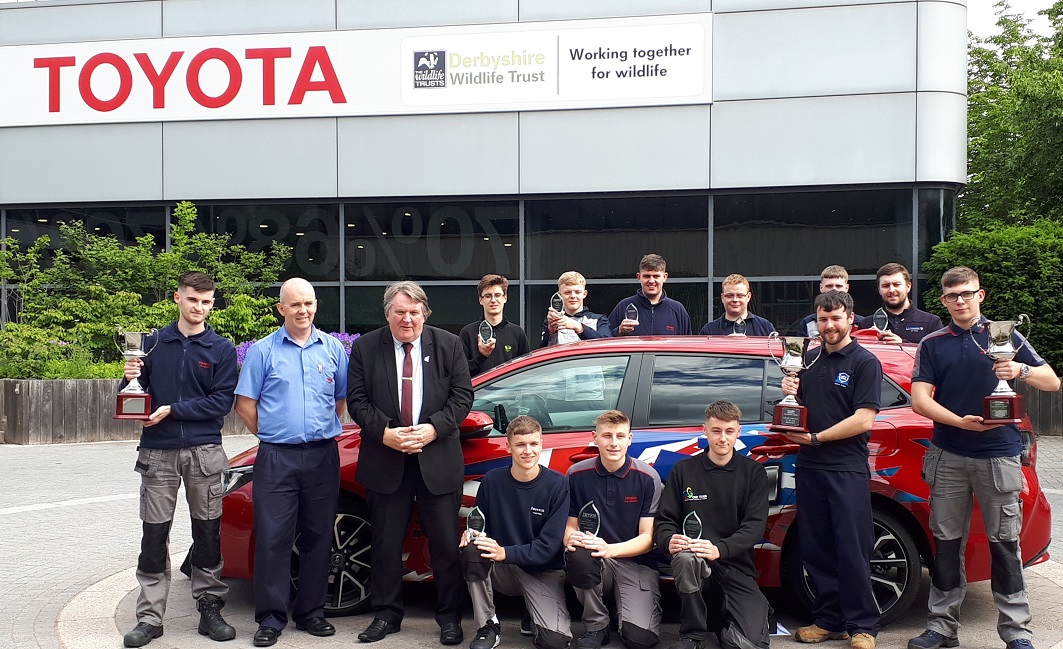 Over 70 apprentices packed into the hall and were joined by Toyota staff, union reps, charity organisations and parents. The apprentices are not all from Toyota and the ADC apprenticeship scheme also includes apprentices from several engineering and supply chain employers from around the area.

Paul Fitzpatrick, Senior Manager for Organisation Development at Toyota UK, opened the event congratulating all the apprentices for their work through out the past year and saying that

the scheme relies on the help of the union, community partners and other organisations.”

As well has a high-quality training scheme in first class facilities the apprentices get the opportunity to be involved in a number of projects and team building activities. At the event teams of apprentices gave presentations about these experiences.

Year 0 apprentices talked about the outdoor team building element of the scheme – when they spend a week organised by the Outward Bound Trust, an educational charity that “helps young people to defy limitations through learning and adventures in the wild”.

Following this Year 1 apprentices gave presentations about their experiences supporting local charities with week-long projects that built planning and communications skills and well as building links with the local community.

Sheila Rowley is Welfare and Safeguarding Lead at the academy as well as the Unite Health and Safety and Equalities rep. Shelia said:

Unite is heavily involved with working with Toyota to support the apprentices at the Academy – most apprentices are Unite members.”

“In particular we feel the volunteering project is very important, and all the apprentice teams make presentations to the branch for donations towards their project for funding.”

Following the presentations there was an award ceremony recognising individual apprentices was held with included Oliver Newdall being named Year 1 apprentice of the Year and Jonathan Ingram gaining the Year 0 apprentice award.

Peter Tsouvallaris is the Unite Convener at Toyota Motor Manufacturing UK and is very positive about the way the union and employer are working together to support the apprentices.

The Unite Toyota branch has always had a holistic approach when it comes to the wellbeing of his members. We have been extremely fortunate to have had Sheila Rowley, one of our senior reps, look after our apprentices from day one.”

As a branch we are proud to have the opportunity to support our apprentices in their voluntary work. We feel it’s a vital that they are given this opportunity to not only give something back to the community but to also help them become the people they want to be.”

I was impressed with the Toyota UK Apprenticeship Development Centre, not just great technical skills but also for community and voluntary projects undertaken by apprentices.”

Tony added that the fact so many apprentices joined the union and had thanked Unite for its support throughout the scheme highlighted the importance of unions supporting apprenticeships.

END_OF_DOCUMENT_TOKEN_TO_BE_REPLACED

New demands on digital skills
The Lloyds Bank consumer digital index 2020 was released on the…
END_OF_DOCUMENT_TOKEN_TO_BE_REPLACED
The union learning Climbing Frame celebrates 10 years
The union learning Climbing Frame is a free website for ULRs and…
Building a sustainable future with the Green Skills Partnership
Badged as Think Global Act Local, the scheme has been developed…
Disadvantaged young people need more from apprenticeships
Catch up with unionlearn’s Lockdown webinar series
Hundreds have people have been tuning into the weekly webinars…
PCS ULR Jo supports Apprentices in CPS
With the aid of a grant from the Learning Events and Apprentice…
Learn with Aegis hosts event to inspire ULR’s
The purpose of the event, held over two days on the 25th and…
Unionlearn’s Covid-19 initiatives
Learning in the workplace has become much more difficult with…
Copyright © 2020 Unionlearn. All rights reserved.
Copyright © 2020 Corporate+. All rights reserved.