Building a sustainable future with the Green Skills Partnership

The Green Skills Partnership (GSP) is rolling out a construction site upcycling scheme that re-routes unused new materials and fittings that would ordinarily be destined for landfill sites, into the hands of individuals and local communities. 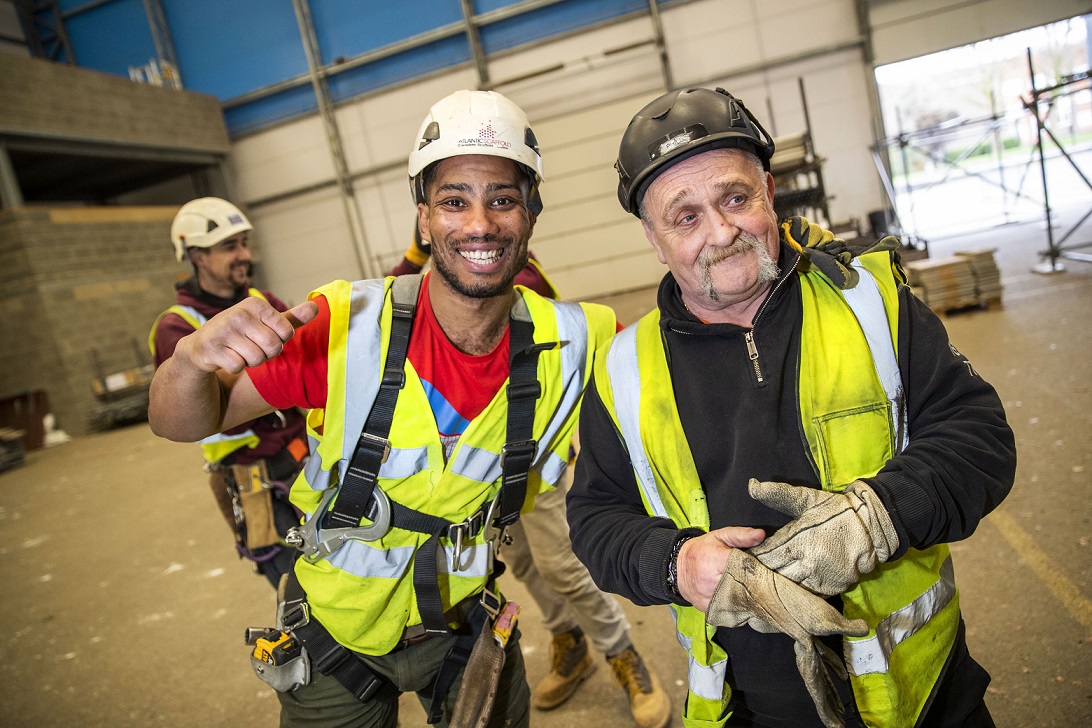 Badged as Think Global Act Local, the scheme has been developed to provide construction projects with an alternative to disposing of excess building materials, fixtures and fittings through what has been the common practice of burying them onsite or treating them as waste in designated skips.

By making surplus materials available for local use, the project has the potential to significantly reduce construction waste and offer a boost to local small businesses and communities by providing them with materials they would otherwise have to buy new.

The upcycling scheme focuses on the materials that become surplus to requirements at the end of each of the five key stages of any major construction project.

Once ground works are completed, there are surplus concrete blocks; bricks at the end of plate level; timber and tiles once roofing is complete; doors, windows, plasterboard, flooring, kitchen and bathroom fittings at the end of internal works; and topsoil, paving and fencing once landscaping and external works are finished.

Up to now, all of this has usually ended up either buried under the new build or dispatched to landfill – which is wasteful, expensive and environmentally unsustainable.

But under the GSP’s new initiative, all these materials can be upcycled into local communities or transferred to local training providers to enable young people, within the impact zone of a project, to be trained to enter the industry.

The initiative is typical of the joined-up approach to greening the construction industry that the GSP has developed since its launch nine years ago.

The GSP was originally inspired by the San Francisco-based Apollo Alliance, a coalition of unions, business, environmental and community groups set up in 2003 to promote the low-carbon economy.

It was launched by unionlearn in 2011 – coincidentally the same year that Apollo became part of the larger, Minneapolis-based BlueGreen Alliance of Unions and Environmental Organisations.

The original brief was to bring together a set of stakeholders that could create work experience opportunities, placements, apprenticeships and local jobs in construction, retrofit, horticulture and waste management projects, first in London and then across the south-east.

Stuart Barber, who is now head of operations and strategy for the GSP, has been involved in the partnership from the very beginning: he was working for unionlearn at the time of its launch, when the GSP was a pivotal part of his portfolio.

These days, the GSP has evolved into a social enterprise made up of 50-plus stakeholders that has been incorporated as a Community Interest Company (CIC) since 2016.

But it remains committed to the holy trinity of jobs, skills and environmental issues, and is still working to create pathways into construction and helping construction companies, and the projects they embark upon, to reduce their carbon footprint.

The germ of the original idea came from Steve Lukacs, operations director at Kent-based Conduit Workforce CIC, which provides high-quality routes into the construction industry for young people with no previous experience.

Like Stuart, Steve has been part of the GSP since the launch and was a regular visitor to the old UCATT (now part of Unite) learning centre based at Canary Wharf in the early years of this century.

The way construction projects have put thousands of tonnes into the waste stream every year has been a bugbear of Steve’s over the years.”

It was his idea that we could do something about it, so we put together a thinktank, came up with Think Global Act Local and put that under the badge of the GSP.”

The green ambassadors, who will be central to the success of the scheme, are themselves very much inspired by the trade union movement’s green reps and union learning reps (ULRs).

We’re targeting the green ambassador training at young people that the construction companies pay us to train and then they go out into their local communities and help spread the word about upcycling the surplus materials.”

By getting the materials into the hands of local small businesses, we can help make the difference between them going under and staying afloat because we can reduce their overheads by supplying them with fixtures and fittings they don't have to go and buy.”

END_OF_DOCUMENT_TOKEN_TO_BE_REPLACED

Engage: taking control of your career
Lucy Thompson tells us about Enginuity's Engage learning…
END_OF_DOCUMENT_TOKEN_TO_BE_REPLACED
Unionlearn prepares for Autumn Festival of Learning
The Festival will feature high profile events such as the…
Learning and Skills policy update - August 2020
This edition of the newsletter includes updates on: the…
Covid risks unemployment crisis for older workers
A new report from the Centre for Ageing Better and Learning and…
Working from home through lockdown
Like many people BFAWU Project Worker Kamran has been working at…
Stephen gets creative following PCS online training
PCS member Stephen Levy recently took part in one of the s
Unionlearn publish 2020 annual report
The report, entitled “Making Skills and Learning Work”, comes at…
Unionlearn Annual Report 2020
Over the past year union learning has continued to open up…
Copyright © 2020 Unionlearn. All rights reserved.
Copyright © 2020 Corporate+. All rights reserved.