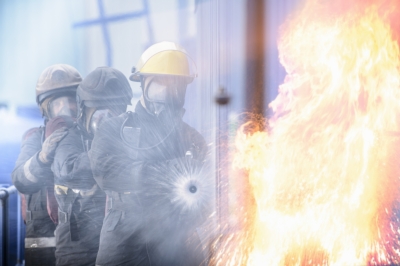 For the first time this year, the Union Learning Fund (ULF) is helping six unions develop innovative learning projects, in addition to the longer-term bids the fund is supporting.

For many years, it has been difficult to encourage innovation because of the annual bidding process.”

However, we have really welcomed the three-year bidding cycle and funds for innovation, which have given the unions the opportunity to develop new areas of work. This is a really exciting time for everybody involved and we’re looking forward to seeing the results of these projects.”

The Fire Brigades Union (FBU) project is called ‘Reducing the risk of firefighter fatalities and heat related illness in the Fire Service and other sectors through learning’.

Recent research has shown how working in high temperatures increases the risk of heart attack, while coroners’ reports into firefighter fatalities have called for greater awareness of the importance of remaining properly hydrated.

To help deliver a consistent approach across the country, the project will create a fully interactive digital e-learning tool, with infographics, animations and videos underlining key points for learners as they work their way through the material.

Using research-led content developed by the University of Brighton, the training and learning package on rehydration will then be offered to firefighters using the FBU’s existing networks and to other workers in hot environments.

The Prison Officers Association (POA) project, ‘The apprenticeship network’, aims to develop a multi-union apprenticeship hub on the Isle of Wight to educate the estimated 1,500 apprentices on the island about their rights at work and protect them from exploitation by unscrupulous employers.

The union chose the Isle of Wight as the pilot area because of the evidence of unimpressive completion rates – just 54 per cent of 16- to 24-year-olds were gaining their intermediate apprenticeship qualifications in 2015.

The Greater Manchester Hazards Centre, supported by UCU, is running a project called ‘Achieving safe and quality apprenticeships and training’, which aims to develop new ways of engaging young people and supporting them on their learning journeys.

The project will work with employers, unions, training providers, apprentices and trainees to raise awareness of the dangers young people face at work: young apprentices aged 16 to 18 are 73 per cent more likely to be injured at work than their older colleagues.

As well as developing age-specific training materials and delivering training through trade union education units, the project will also develop a social media platform to support union reps, providers, employers and the apprentices and trainees themselves, as well as developing an interactive app.

Community’s project, ‘Developing self-employment opportunities for the disabled’, is researching barriers faced by disabled people who go into self-employment.

Working in collaboration with the Association of Independent Professionals and the Self-Employed (IPSE), the project will examine some of the key barriers to self-employment for disabled workers, including low pay, low skills, interaction with the benefits system, accessing start-up capital and training and career progression.

The aim of the research is to identify the key barriers disabled workers face in self-employment in order to tackle them in the years ahead.

The College of Podiatry project, ‘Workforce wellbeing and diversity’, aims to provide union reps with training and support to foster their own resilience and also to help their co-workers better deal with the challenges of working in today’s health sector.

The project in part addresses the increase in cases of workplace bullying in the heath sector demonstrated by the results of the 2017 NHS Staff Survey, which revealed that 30 per cent of all NHS staff had suffered psychological stress due to bullying behaviours in the workplace.

In addition, it will enable the union to develop its own work tackling discrimination as part and parcel of the union’s drive to improve its members’ wellbeing at work.

Finally, the University and College Union has designed its ‘Future of the profession’ project to encourage greater continuous professional development (CPD) among its membership.

The project will target low-paid, casualised and fixed-term contract workers in further and higher education who have found it hard to access CPD through traditional routes and are unable to fund their own learning portfolios.

END_OF_DOCUMENT_TOKEN_TO_BE_REPLACED

New demands on digital skills
The Lloyds Bank consumer digital index 2020 was released on the…
END_OF_DOCUMENT_TOKEN_TO_BE_REPLACED
The union learning Climbing Frame celebrates 10 years
The union learning Climbing Frame is a free website for ULRs and…
Building a sustainable future with the Green Skills Partnership
Badged as Think Global Act Local, the scheme has been developed…
Disadvantaged young people need more from apprenticeships
Catch up with unionlearn’s Lockdown webinar series
Hundreds have people have been tuning into the weekly webinars…
PCS ULR Jo supports Apprentices in CPS
With the aid of a grant from the Learning Events and Apprentice…
Learn with Aegis hosts event to inspire ULR’s
The purpose of the event, held over two days on the 25th and…
Unionlearn’s Covid-19 initiatives
Learning in the workplace has become much more difficult with…
Copyright © 2020 Unionlearn. All rights reserved.
Copyright © 2020 Corporate+. All rights reserved.