The Bakers, Food and Allied Workers Union (BFAWU) have been supporting older learners through drop in sessions at a community centre in Wigan. 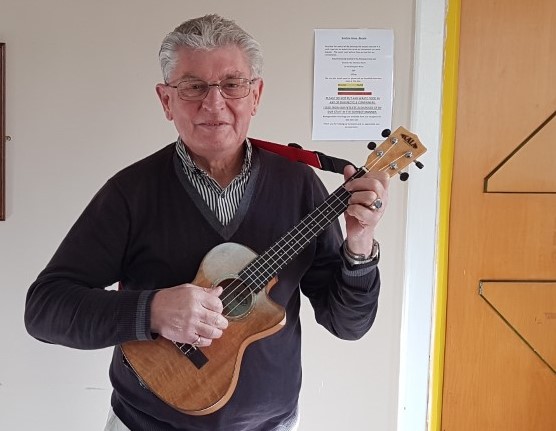 One such learner is George McGuinness. George first walked into Sunshine House soon after the unions computer “drop in’s” had first been set up.

At the time George was aged 71 and an active member of the Wigan Ukulele Band.

BFAWU Project Worker John Fox explained how the union supported Georges love of music and interest in IT. John said:

George was a hungry to learn new things. He had bought a tablet and wanted to know how to find his way around it, so that he could access music to help him with the band.”

This was just the start, as John explained:

He was also asking where he could get Basic English lessons as he wasn’t very confident.

We sign-posted George to Wigan Life Centre library where they did basic literacy courses for adults he started to attend. Unfortunately, the lessons were on a Tuesday, which clashed with our drop in sessions, but George, not to be put off, would attend Sunshine House first, then go early to do his English.”

George started at Entry level 2, gaining that qualification and over the years has carried on going doing other qualifications.

Fast forward five years, now 76, George still attends the Sunshine House Drop in. He has not had the best of health but he is an avid music lover and dancer. He still plays the ukulele and guitar and has been doing jive lessons for some time.

George takes up the story and explained:

I came to Sunshine House about 5 years ago; to help me to use my computer, when I got there I met John and Lorraine who run the computer club for the community in and around the Scholes area of Wigan.”

It’s a warm and friendly atmosphere, and nothing is too much trouble for them.  I asked how to set up my gas and electric bills and how to get a great deal from these companies. They showed me all the comparison sites that can give good deals. This saved me a lot of money.”

George had also struggled with spelling, which he mentioned at the club.

John got me on the BBC web site, he also phoned the tutor at Wigan Library as they did English classes, and made an appointment for me to go the next Friday to sign up for the course.”

My spelling has improved immensely, and I have now passed my Entry 1 and 2 and now carrying on through my entry 3.”

George is still attending the computer club and John is very impressed with the way that George has embraced learning later life.

He is now accessing his music through the internet, regularly down loading tab music to help him play the guitar and looking up different dances to learn. His English has come on leaps and bounds and he uses his tablet to help him with his spelling and maths.”

George’s confidence with the tablet is growing and growing and every time we see him he has something new to ask or do. This keeps us on our toes and helps with our own self development.”