We heart retail and distribution workers

Writers Clare Shaw and Mary Colson wanted to make sure the Usdaw learners they have helped are recognised for their vital work in the current crisis. So they decided to give shape to their feelings. 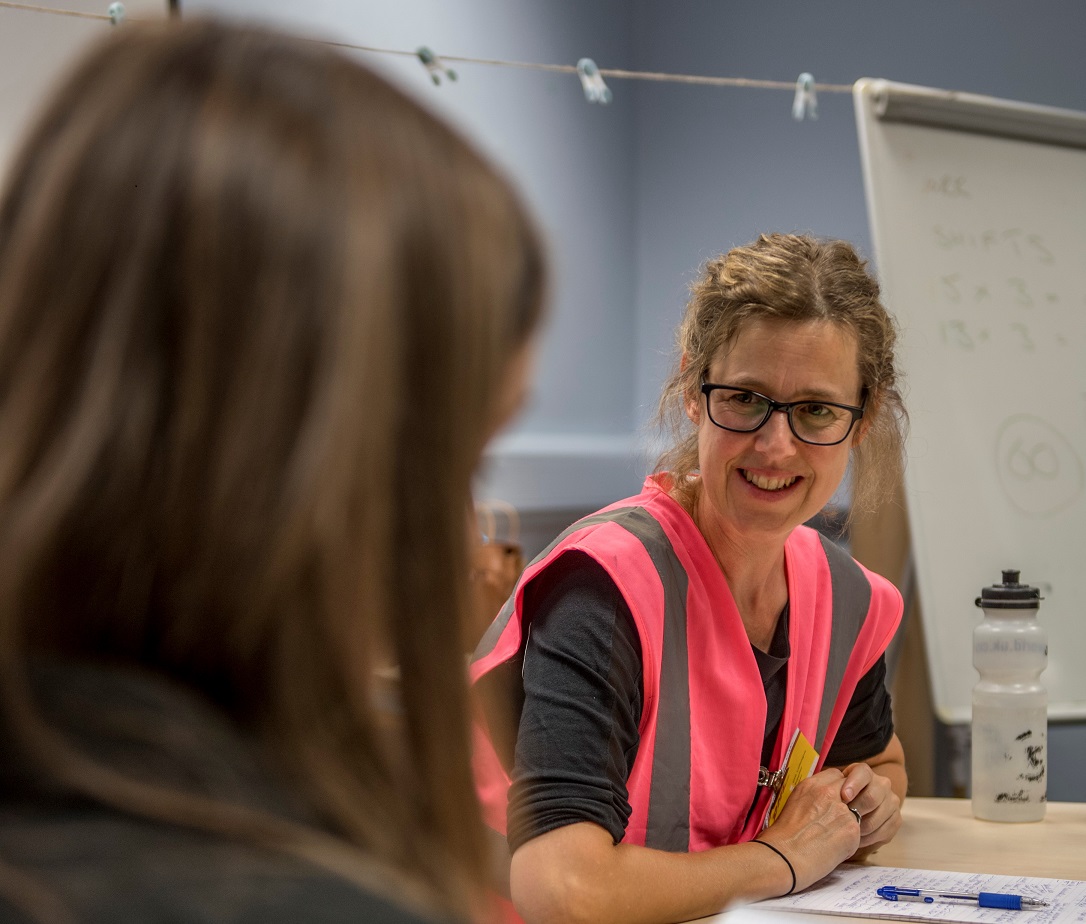 After working with Usdaw members on a range of writing projects over the past 18 months, poet Clare has written a heart shaped thank you to all the retail and distribution workers who are working so hard to keep us all going during lockdown.

The poem "What Did You Do in the War" was written as a message of solidarity from Clare and her colleague Mary, who have been helping warehouse and shop workers boost their reading and writing skills through Usdaw’s lifelong learning project.

After checking in with learners they had connected with on the courses, it was the ugly experiences they heard about in response that prompted Clare to write the piece.

This is an industry where people are every day knowingly and consciously putting themselves at risk and working really long hours to bring us services we need.”

These people, who have been so under-valued, are now some of the most important people in the nation, but we were hearing how some people are swearing at them and threatening them – those are the massive realities I wanted to capture in a poem.”

Clare started with the shape the words would make on the page, using the heart to convey her sense of gratitude with an eye to what would be immediately recognisable when pinned to a work noticeboard.

Clare said: “I wanted to write something that said,

Thank you, we see you and appreciate you’ and I wanted something that would visually symbolise how we felt – that’s where the love-heart came in.”

And I’ve been in enough workplaces to know a poem on a wall isn’t going to necessarily get read so it needs to be something you can see straightaway and even if you don’t read it, it’s a nice thing to see.”

Clare and Mary have been working with Usdaw through a partnership between union’s lifelong learning project and the Royal Literary Fund (RLF), where they both deliver reading and writing workshops to students, former prisoners and children and teenagers with mental health issues.

It was Usdaw learning rep Sean Dixon, who managed The Learning Zone at the Castleford Distribution Centre, who clocked the potential for collaboration with the RLF when he heard author Ian McMillan mentioning the RLF’s work in universities.

I went to a Mental Wealth festival in Barnsley a couple of years ago andIan McMillan mentioned how the RLF attached writers to universities and made this throwaway comment that you ought to look at this when you get back to your workplaces.”

I emailed the RLF to ask if they’d thought about attaching a writer to a workplace and they said they were looking at a couple of projects in the near future so I forwarded the reply to my project worker, Martyn Warwick.”

Martyn then organised a meeting in Leeds with the RLF’s Fellowship Officer Steve Cook to discuss how the two organisations might work together.

Steve talked about how the RLF embedded writers in universities to teach students how to write good essays and my brain started firing about note taking, minute taking and report writing skills and life writing for members.”

They agreed to set up a multi-stranded pilot, with a life writing course to capture stories from people in the workplace and a Reading Round group at Castleford; and a reps’ skills course at Next in Bradford.

All three were really well received by everybody involved and a lot of that is down to Mary and Clare and their personality and their approach – they got immediately what we were looking for and brought everything to life.”

Their quirky approach really resonates with people, the way they use fairy tales in activities, like a note-taking exercise telling the story of Cinderella in 50 words or writing a grievance on behalf of Snow White who’s been forced to live with seven strange blokes!”

The partnership has gone from strength to strength since the pilot, with more workplaces taking up the opportunities and the offer itself expanding to include sessions targeted at team leaders and managers to help them better communicate over email and when writing reports.

We are driven by this belief that being able to write a note to school to request time off in term time or writing a disciplinary report as a union rep or life writing where you’re saying ‘My voice is important and my story is interesting’ – these are really key skills to having a sense of empowerment in your life,”

Mary and Clare themselves have loved working with Usdaw. Mary said:

I like how by the end of a course, there’s a mindfulness about expression on a page but there’s also a carefreeness.”

People who have been so worried about writing in the workplace are starting to get to the point where they’re thinking more about it but not in an anxious way – it’s liberating.”

For Mary, a fiction and non-fiction writer who spent 25 years teaching English at secondary level to classes of 30 or more, the union approach of teaching groups of between eight and 12 is a revelation.

I used to get to the end of a half term sometimes and I’d look at the register and think ‘I have not spoken to that child one-to-one this half-term’ but in these courses we get so much time one-to-one and you can see the learners lap up that close attention.”

These are collaborative, supportive, shared learning environments where there’s peer learning and support going on – it’s what every person’s experience of learning should be, regardless of age or ability.”

The challenge now is to move this online, which Clare and Mary are currently working on with Martyn and Usdaw National Lifelong Learning Coordinator Ann Murphy. Ann said:

I’m happy to say we are exploring our online offer and options around webinars with RLF.”

The work that Sean and the reps have developed with the RLF has paved the way for a very positive collaboration between Usdaw and the RLF, which we are now rolling out to a range of other sites.”

And at Castleford, where Sainsbury’s Argos is pushing on with its plans to close the distribution centre on June 12th, even though physical distancing protocols makes face-to-face redundancy support all but impossible, Usdaw has been delivering one-to-one CV writing advice sessions with Mary and Clare using video-calling IT software.

In the meantime, Sean has made sure the poem is pinned up on noticeboards throughout the distribution centre. Sean said:

We’ve got it up on the union noticeboards and in the canteen and people have seen it and talked about it.”

They’re both brilliant, Mary and Clare, they’re so interested in everything: they’re wonderful people.”

This article first appeared in the Summer 2020 Learning Rep

END_OF_DOCUMENT_TOKEN_TO_BE_REPLACED

Engage: taking control of your career
Lucy Thompson tells us about Enginuity's Engage learning…
END_OF_DOCUMENT_TOKEN_TO_BE_REPLACED
Unionlearn prepares for Autumn Festival of Learning
The Festival will feature high profile events such as the…
Covid risks unemployment crisis for older workers
A new report from the Centre for Ageing Better and Learning and…
Unionlearn publish 2020 annual report
The report, entitled “Making Skills and Learning Work”, comes at…
Birkbeck holds Career Bootcamp to develop employability skills
Unionlearn partner Birkbeck is running the Bootcamp from 28th –…
A decade of online support for ULRs
Before going online the Climbing Frame was available as an…
The union learning Climbing Frame celebrates 10 years
The union learning Climbing Frame is a free website for ULRs and…
Bectu run bite sized training sessions online
As part of the union’s response to COVID 19 lockdown, the Bectu …
Copyright © 2020 Unionlearn. All rights reserved.
Copyright © 2020 Corporate+. All rights reserved.