Workplace learning with the CWU returns to Southampton

On-site courses in ICT, Maths and English are available to Royal Mail workers within the Wessex South Central Branch area, now that their new learning centre is up and running. 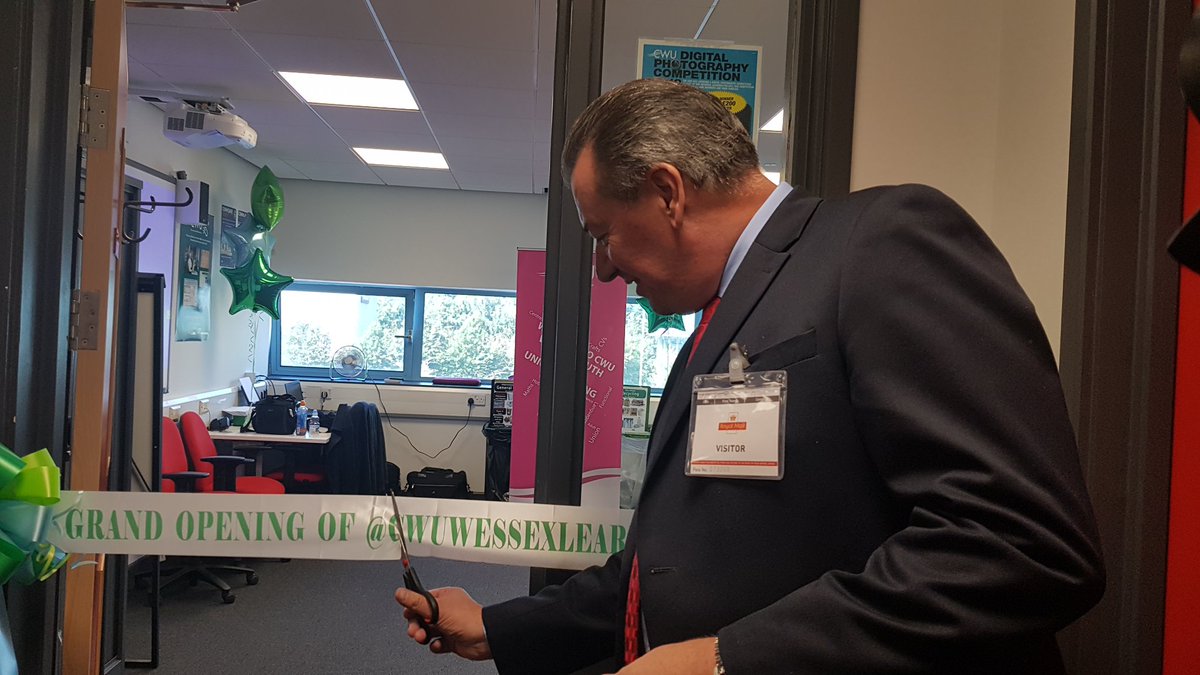 I’m really honoured to come here and do this and it’s a massive day for Barry and Phillip and many thanks for all you do.”

Education is about creating open minds and everyone should have an equal opportunity – that’s what this centre provides to everyone.”

Referring to the new Four Pillars national agreement, Terry made the point that the joint commitment to improve workplace culture would be helped by facilities such as this one.

Barry explained how there had been a learning centre in the past, but that it had fallen into disuse and had been used for storage, but that at a branch meeting earlier this year, a decision was taken to push for the re-establishment of the unit.

A new agreement was reached with management for the full restoration of the centre and, with the support of the branch, the CWU education department, and a lot of hard work an persistence from volunteers, it has now been re-opened.

Around 450 people work in the mail centre, but the branch as a whole serves nearly 2,000 members and all of them are now able to access the learning opportunities provided.

Philip said: “We’re hoping to be able to offer foreign language learning in the near future as well."

He added that added that Spanish is a popular choice, and distance learning is also an option, with over 30 people having signed up for one of these type of courses during a recent learning open day.

Barry thanked the branch, the education department, the regional education committee and Terry for performing the opening.

Barry said: “I’m really looking forward now to getting this really up and running.”

Lee Wakeman, from the CWU Education & Training Department, praised the branch for its collective efforts, saying

This is just a room, but it’s the people in this room who have made and are going to make a big positive difference.”

END_OF_DOCUMENT_TOKEN_TO_BE_REPLACED

Engage: taking control of your career
Lucy Thompson tells us about Enginuity's Engage learning…
END_OF_DOCUMENT_TOKEN_TO_BE_REPLACED
Unionlearn publish 2020 annual report
The report, entitled “Making Skills and Learning Work”, comes at…
Unionlearn Annual Report 2020
Over the past year union learning has continued to open up…
Bakers use their LOAF to promote learning
Carol Hillaby is a Project Worker with the BFAWU Learning…
The union learning Climbing Frame celebrates 10 years
The union learning Climbing Frame is a free website for ULRs and…
Getting functional skills up and running at Tesco Goole
Keith has been working with the Learning Curve to support…
Gardening success at HMP Hatfield
The POA Learning Centre in Doncaster is based alongside HMP…
Promoting union learning - a handbook
A handbook for union learning reps (ULRs) and reps involved in…
Copyright © 2020 Unionlearn. All rights reserved.
Copyright © 2020 Corporate+. All rights reserved.